Currently he is working at the Logos Foundation, a centre for experimental music in Ghent, where he collaborates to the development of <GMT>, a programming language designed for real-time algorithmic and interactive musical applications. He is also responsible for Logos Foundations concert programming.

He is also a member of the Logos Robot Orchestra, where he has the possibility to work with cutting edge technology like a complete robot orchestra, radar and sonar movement sensors and a polyphonic pitch detection device. This allows a completely new composition paradigm, abandoning the traditional linear score concept. Most compositions he writes for the robot orchestra are real-time interactive pieces, computer programs that make musical decisions dependent on the actions of musicians or dancers that play/dance live together with the orchestra. 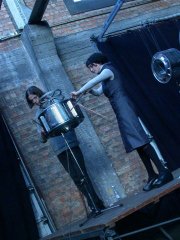 Next to his work with the robots; he also creates electroacoustic / ambient music and chamber music with live electronics, mostly using open source software like Pure Data and <GMT>.

Together with Laura Maes and Leen Gyselinck he created the audiovisual piece ‘Kitch’n Glitch’ and the installation ‘WhirlWash’.
With Nan-Ping Chan and Yvan Vander Sanden he created the multimediaperformance ‘C0de‘.
Withe Maja Jantar he created the project ‘Glaer’, where Jantar’s voice is transormed electronically, using a Theremin as controller.

His music can regulary be heard in and around Flanders, but has also been played on festivals in the Netherlands, France, Poland, Switzerland, Germany and Portugal.